Welcome to Human Made: Stuart Shields 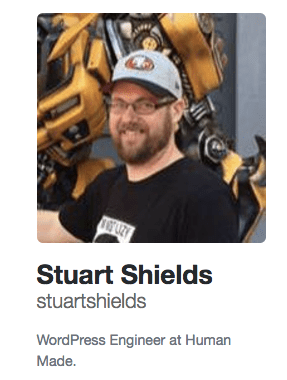 I’m so pleased to announce that Stuart Shields has joined us as a WordPress Engineer! Based in Toowoomba, Australia, Stuart comes to us from XWP where he’d worked as an Engineer for over a year and a half on VIP client projects. He’d already gained significant experience in a small team at a local Graphic Design agency, working on projects for local and state government organisations, and non-profits. Stuart has spoken and volunteered at WordCamp Sunshine Coast 2016, and volunteered at WordCamp Auckland 2017. It’s a pleasure to welcome him into the fold!

Thanks for the warm welcome!

I originally started hacking together websites back in the late 90’s, over the next decade or so I did the odd website or two for friends while I worked in retail. Fast forward to 2010, I decided to get a job at a local Graphic Design Agency and from there I learnt WordPress and everything that comes along with it – custom themes, plugins, REST-API, to name just a few.

In 2015, I went to my first WordCamp: WordCamp Brisbane. I saw Ryan and Japh’s talks on various WordPress topics and knew that Human Made was something special. In 2016, after going to two international WordCamps (Europe and US), as well as WordCamp Sydney, I got to hang out with some humans in person – Peter, Bronson, Noel, Tarei and Dee, and knew that this was the place I wanted to work at some day.

Fast forward, to the middle of 2017 and here I am, working at Human Made with some of the most talented people I’ve ever met. I can’t wait to see where this journey takes us together.