Previously I covered my experience as an attendee at WordCamp Manchester. Now we get a look behind the scenes from our very own Jenny, who was a main organiser. I’ve been chatting to Jenny about what was involved in WCMCR 2014.

What is the background to WordCamp Manchester, how did it come about?

Mike Little had the idea for a Manchester WordCamp as there were lots of people in the Manchester community who weren’t able to get to the evening user group. He wanted to do something super-local that would involve more of the Manchester WordPress community. A weekend event would make it accessible for more people.

How did you get involved?

I offered to help at the user group and ended up being an organiser alongside Mike and Philip Valentino. I volunteered because I really wanted to see a WordCamp in Manchester. The last one was in 2010, so there had not been one for quite a while.

How big was your team?

The team started out as three, me, Mike and Phil, then expanded to four with Sue Fernandes.

How long did it take to plan?

We started to plan in early February so it was a very short lead time of only 4 months.

What were your main aims, how did you want it to be different?

Our aim all the way through was to be Simple and Local. We wanted to encourage local speakers and in particular new local speakers. We were also aiming for attendees from the Manchester area, so the attendees we had from further afield were an added bonus for us. As I mentioned before, we really wanted to attract the people who can’t normally make the evening Manchester user group due to family or other commitments.

We wanted to appeal across the community. The General and Technical tracks reflect Mike and myself with Mike preferring the more general content and me the more technical.

Each city or area should be able to have a WordCamp with it’s own particular flavour. In Manchester it’s all about being simple, straightforward and getting the job done, like the brown paper lunch bags. Of course, for a Manchester WordCamp we definitely had to start with the bacon butties.

How did you decide on the speakers, what mix, what level?

We opened up the call for papers inviting everyone to speak and also tried encourage people individually in the local WordPress community to apply.

After the call for papers closed all the decision were made based on the Title and Abstract submitted. We marked them based on what we would find interesting to see and what was right for this particular event. Some, such as the Law talk, we knew would be interesting to everyone, other talks were more in the middle ground and difficult to decide about. We wanted to have a good balance of general and technical and cover different levels of expertise.

We also wanted to have Lightning Talks right from the start. They are a great way to get some new speakers taking part without too much pressure. Maybe some of them will go on to speak at their local user group or a WordCamp.

We were pleased to end up with quite a few new speakers and also with a 50-50 gender balance, even though this wasn’t something we specifically tried to do. Despite all the effort in choosing the programme I didn’t actually get to see many of the talks on the day. I’m looking forward to catching up on WordPress TV. The videos are being edited at the moment so they should be up there soon.

What was your biggest challenge overall and during the event?

The biggest challenge was the time-scales. We could have done with more time and more people. I do have some people in mind to help out for next time. I’ve been keeping my eye out for people with particular areas of expertise. Another big concern was the catering as we didn’t want people with different dietary requirements to feel excluded.

One area that turned out to be remarkably easy was the venue thanks to Richard Eskins from the Manchester Metropolitan University.

What was your favourite moment of the weekend?

What are you most proud of?

I already mentioned bringing people together. I’m also really proud of the new speakers that were braving the stage for the first time. Everyone did really well and as far as I’m aware no one has been saying that they saw a bad talk. Everyone did their best and it was great to nurture the new speakers and bring them through.

Would you do it again (as an organiser)?

We’re having a break for now, but I think we’ll definitely be doing another Manchester WordCamp quite soon. It will still be locally focussed and next time there will be more time, more people and more planning.

My vision is to get the local community involved, with a bigger team of people using their expertise to take on the various tasks so it is not all resting on just a few people. I think many people don’t have the self belief; they don’t think they can organise a WordCamp but I want to empower them and show them that they can. 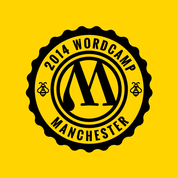