If you’ve been to a WordCamp in Italy during 2014 or 2015, you’ve probably taken a detour to a parallel universe at some point. That’s right: whilst WordCamps were held in 34 different countries in 2015, with a huge jump in WordCamps held in Europe (from 17 in 2014 to 29 in 2015), Italy’s last WordCamp was in 2013 and the Belpaese was simply disappearing from the WordPress community geographic map. If there had been a travel guide for WordPressers, Italy wouldn’t have cracked the top 35 in the destination list!

That’s why the recently held WordCamp Torino has been an event packed with meaning and purpose, from which I’ll keep plenty of good memories with me. Here are just some of them.

Culture-wise, Italy is much less homogeneous than non-Italians think. It’s known as the “country with a hundred cities and a thousand bell towers”, where villages that are 10 miles apart speak radically different dialects, have very inconsistent traditions, and can literally hate each other.

This was somehow reflected in the WordPress community until last year: although Italians love WordPress and adopted it from the very early days, there wasn’t a central hub for communication and mutual support for meetup organisers and attendees. The community was scattered, meetups were just a handful and didn’t happen with regularity. 2016 was going to be the third year in a row without an Italian WordCamp organised by the local community.

After a decisive meeting in Seville during WCEU 2015, and once the Italia WP Community team was created on Slack, in less than one year Italians organised dozens of meetups, a Contributor Day in Milan (October 2015), and a big, 300-people WordCamp in Turin.

Francesca Marano, the true leader of the community on Slack, was also the lead organiser of this successful event.

Turin (Italian: Torino) is an important business and cultural centre of Northern Italy. Capital of the Piedmont region and former capital of the Kingdom of Italy, it’s well known for its predominantly Baroque architecture, beautiful squares, historical buildings, and aristocratic cafés.

Although it might not be the first Italian town that pops to your mind, Turin has been crucial in the development of Italian contemporary culture: it served as a literary centre for centuries, it’s the home of FIAT (the leading Italian car brand), and is considered the birthplace of the Italian cinema. As the city that hosted the first WordCamp of this new Italian community, I’d say it’s non-obvious, yet an excellent choice and appropriate for many reasons.

If I have to name one symbol of my stay in Turin, I can’t possibly think of something other than chocolate. Turin’s iconic chocolate is a little piece of hazelnut-flavoured goodness called “Giandujotto”—guess what the local Wapuu “Gianduu” was named after? The “bicerin”, a drink made of espresso, hot creamy chocolate and whole milk (and sometimes liquor) served layered in a small rounded glass, must not be missed either.

The contributor day preceded the conference day, which was an unusual yet not unique choice (WordCamp London anyone?). The event was hosted in the same venue as the main event: a large, well-designed co-working space called Toolbox. 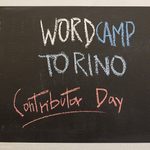 Several groups were arranged, including core contributors, theme reviewers, polyglots, support, mobile, WordPress.tv and so forth.

The number of first-time contributors was rather high, and so was the ratio between WordCamp attendees and people who had also signed up and showed up for the contributor day.

As always, given my non-development background, I mostly followed business/entrepreneurship/user talks. The array of talks was remarkably diverse, from core functions to real blogging stories, project management, SEO, and so on. Most talks scratched the surface rather than going into depth, but this is what you usually get at WordCamps: you get to meet and talk with great, like-minded people, while the sessions give you food for thought. Get yourself introduced to a topic, see it from the speaker’s angle, embrace their big idea. Thinking further and going deeper into it is your responsibility.

Our very own Petya and John were included in the schedule. Petya delivered a talk on her first year as a location independent professional, touching on several tips and strategies for working in a distributed team.

You can find her slides here, and an article she wrote on the same topic here.

John, on the other hand, spoke on moving forward with WordPress as a mature platform.

His slides are here.

Beyond our Humans, among my favourite talks, I’ll mention Karim’s take on project management, where he shared his best PM practices for working with clients, and Taco’s introduction on organising a WordPress Meetup.

Local groups are growing. There are a few new meetups and user groups showing up along the Boot, and during the contributor day another major Italian town applied to host their own WordCamp in 2016: you could feel the enthusiasm across attendees, speakers and organisers, and I truly hope it lasts.

While WordCamps are an excellent source of inspiration, what matters most is that the community keeps that flame alive. Following the incredible growth of the Italian community on their Slack team, and seeing how many meetups they’re organising, I’m fairly confident that’s not going to be an issue.