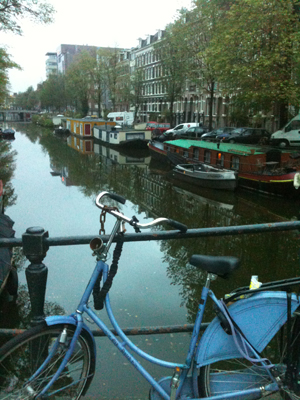 I survived my first WordCamp and what a event to start with – WordCamp Europe in Leiden, Netherlands. Judging by the comments at the time and on Twitter afterwards this was something a bit different from the norm. A lot more attendees and a real euro and international flavour helped to make WordCamp Europe a really special event.

Bright eyed and bushy tailed, I joined the rest of Human Made (and friends) in Amsterdam on Friday evening, arriving to find everyone else exhausted after a hard week and many late nights working on the WP Remote Premium release. We were staying in Amsterdam, rather than Leiden, which added some logistical complications to the whole weekend for us all. We couldn’t find the train station in time on Saturday morning and ended up missing the start of the conference – oops, but apparently not unusual for Human Made at WordCamp. A shame as I was looking forward to Vitaly Freedman’s presentation on Behind the Scenes at Smashing Magazine. Sunday was only slightly better as we managed to leave Joe and Matt at the train station buying the tickets, (not to mention the ones who didn’t make it out of bed…).

Good job it wasn’t us organising the conference which really appeared to run like clockwork. But logistics aside, it was all about the people and the talks. For me, there seemed to be a couple of themes running through the event, particularly in the main hall. 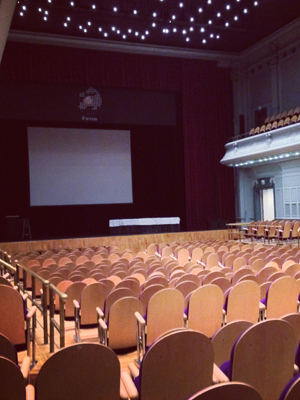 The first was about taking WordPress to the next level commercially. On Saturday Sara Rosso spoke about how Big Brands love WordPress later David Coveney from interconnectIT about Unlocking Enterprise with WordPress and then our own Tom Willmot and Noel Tock as part of the panel discussion about Running a European Web Development Agency. It was great to see these kind of talks where WordPress is framed as a large-scale solution for big companies and brands – I think it encouraged everyone to aim high and help to raise the overall profile of WordPress.

On the product side of WordPress there were a number of talks about achieving commercial success from WordPress products, apps and plugins. These included Kim Gjerstad talking about the plugin Freemium model, Vladimir Prelovac about ManageWP, Frederick Townes about Business Optimization, Joost de Valk about The Victory of the Commons (why making money from open source products is good for open source overall) and our own Noel Tock again about the journey of happytables as a Saas. The talks reflected the increasing ability to make a living from a WordPress products and services as well as client work. 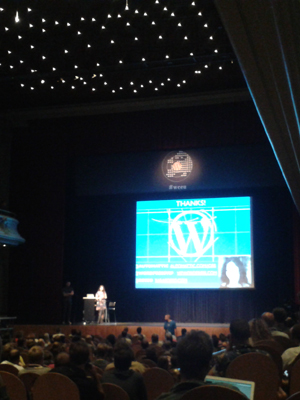 The second theme was about involvement and community. Part of this included making sure that WordPress is accessible; Bram Duvigneau did a really enlightening talk from his perspective as a blind user and developer using a screen reader. It was reflected in the globally themed talks such as Internationalization from Samuel “Otto” Wood and The State of Multilingual WordPress and Learnings from Growing Local WordPress communities in Japan from Naoko Takano. It also encompassed how everyone can contribute to WordPress. Hanni Ross spoke on Sunday about the different ways to get involved with the WordPress community and everyone got the chance to put it into action on the Contributors day on Monday.

That was my personal take as a WordCamp newbie; the rest of Human Made are veterans so I’ve combined everyone’s favourite bits to try and give a fully rounded view of the event. As a company our highlight were: 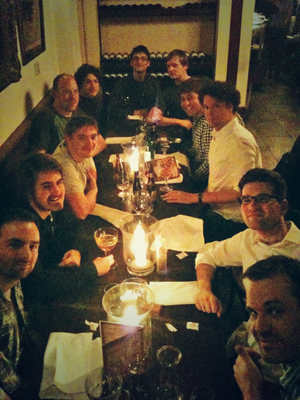 The amount of people there and the opportunity to meet friends and colleagues from the WordPress community “in the flesh”, have face to face conversation and even some dancing.

The overall quality of the talks and the scope of topics covered. A good balance between technical and business orientation and a lot of big community names taking part.

The sheer amount of effort, blood, sweat and tears that went into the event (including Noel’s brave effort chairing the Agency panel discussion after an all-nighter at Oktoberfest).

Getting involved: Noel as a presenter, panel chair and organiser; Tom as a panel member and volunteer.

The Contributor Day – again a brilliant chance to work with other people and another opportunity to get involved and contribute to core.

The beer, and the fact that lots of it was free. The free beer resulting in lost phones (one temporarily and one permanently).

The location – Amsterdam and Leiden were both beautiful and well stocked with places to drink the aforementioned beer.