We’ve had an awesome 2015 at Human Made, growing our team, delivering great sites for amazing clients in our agency work, and launching some amazing products (have you signed up for Nomadbase yet?): I would totally only use emoji to write this whole sentence just to celebrate. ??↗️?? (we like emoji). But in the spirit of the holiday season, today we’d like to focus on something else: giving back. Human Made are who we are because we are contributors to the open source projects we love.

Why we are contributors

Human Made’s business is built on top of open source projects. We are a WordPress development agency and use a multiude of other open source technologies in our day to day work as well. We are strong believers in open source. Contributing back and improving the platforms we use in our work is a huge priority for us. Apart from being a passion for so many of us, contributing back is an investment in the future of WordPress and our own future.

In 2015, thanks to the growth of our operation, we were able to expand our continued contributions to WordPress core. Humans also helped teams throughout the ecosystem – Community, Accessibility, Docs, Polyglots, BuddyPress. We hope this summary of our efforts serves as an inspiration for companies who use WordPress for their business, and that more of you will see the benefits of becoming contributors alongside us in 2016. 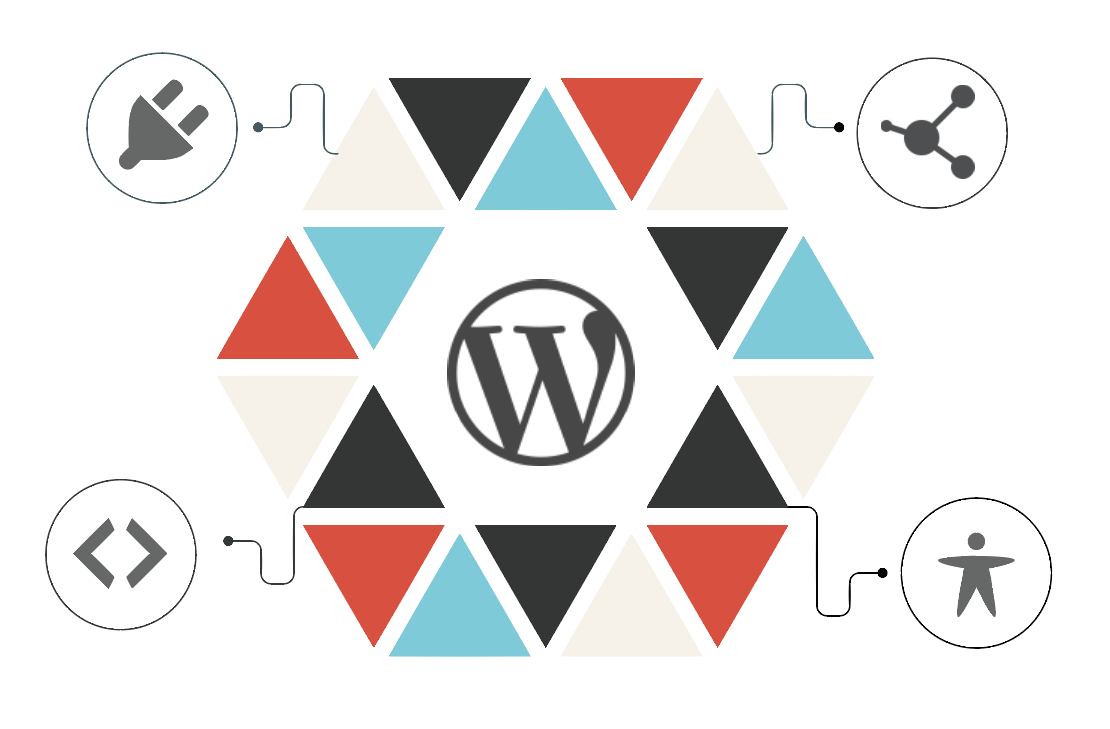 Human Made developers are deeply involved with building WordPress core. We have three core committers and a release lead in our lines and several developers dedicated to feature plugins. 10 Humans got props in the release post for WordPress 4.4. Ryan and Joe are half of the team who brought the WordPress REST API to core.

We also maintain ten active plugins in the WordPress.org plugin repository and our BackUp WordPress plugin is used by thousands every day.

We have 232 public repositories on GitHub that can be used by others, 1523 stars across our Human Made repos and 6459 stars if you count everyone’s personal GitHub repos as well. You might have heard of, used, or even contribute to some of these: S3 uploads, Mercator, Tachyon, Custom Meta Boxes, WP Thumb, Salty WordPress, Cavalcade, Backdrop.

Thinking of open sourcing some of your work? Read about how and why one of our 2015 clients, ustwo, did it.

We are a location independent company and we love to travel and meet WordPress and PHP people across the globe. As a part of our efforts to give back, Humans went to more than 50 events in 2015 and presented 44 talks at 27 conferences all over the world.

Ryan gave a talk on the REST API at Loopconf. Noel spoke at the first ever Theme Conf and at DNX Global – a conference dedicated to remote work.

Last but not least, we can not forget the many presentations the team gave throughout Europe at user groups and smaller meet ups.

Organising and volunteering at events 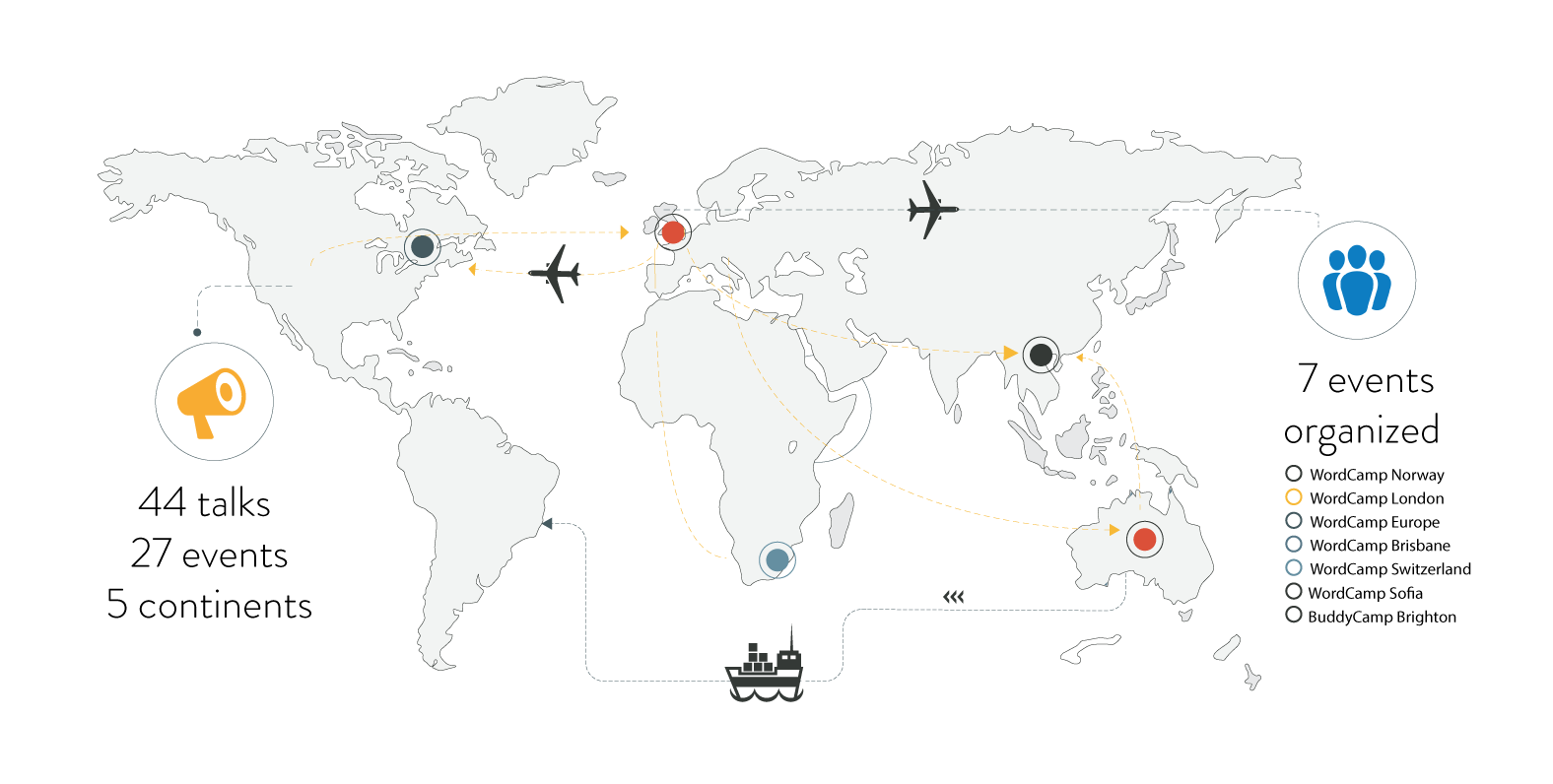 Many Humans are core members of their local WordCamp organising teams and in 2015 helped bring to live 7 different WordCamps across Europe and Australia.

Scott led WordCamp Norway 2015 back in February, Jenny and Tom were in the organising team of WordCamp London. Our Brisbane crew Bronson, Lackie and Tarei helped organise WordCamp Brisbane. Petya organised WordCamp Europe and WordCamp Sofia. Noel was the lead organiser of WordCamp Switzerland and one of the original WordCamp Europe organisers. In 2015, he jumped back on the team to help with sponsorships for Vienna.

In July Paul Gibbs organised the first BuddyCamp in Europe, held in Brighton. Our own Dasha was a part of the organising team for PHP South Coast. Dasha and Matt continue to help organise their local WordPress meet ups in Brighton and Leeds respectively.

Petya and John represented WordPress at OSCON 2015 in Amsterdam where we had a booth amongst many other open source projects.

A Day of REST

As a part of our efforts to share our knowledge about contributing and to help more people get involved in the WordPress project, Humans have been a part of more than 15 contributor days in 2015. Some of these were stand alone events, such as the first Contributor Day in Italy, which took place in Milan in November.

As a part of her job, Jenny spends half her time working in tech communities, including the WordPress Community team. Her work involves speaking at events, going to meetups, organising contributor days and helping event organisers from all over the world. Jenny travels the world to inspire people to give back, to be brave, to step up and grow in the community. She’s an amazing representative for Human Made’s passion to empower women in tech and to give people across open source projects their voices.

The internet is a truly global, international phenomenon. To grow globally WordPress needs to make sense to people in all languages and cultures. There are now 100 functional translations used daily, with dedicated translations teams, and more than 50 further translations now in the works. This vision to take the most popular CMS on the Web to the whole world is what inspired me to take a lead role on the Polyglots team in 2014. Since then I’ve dedicated a huge part of my time talking to translators around the world and helping them release translations with every WordPress release.

In 2015 many Humans got involved with translating WordPress – we have eight contributors to different WordPress locales and make WordPress available in Bulgarian, British, Australian and New Zealand English, Portuguese, Italian and French Canadian.

Contributing as a company culture

We don’t track how much of our company time goes into contributing. It’s not a target, or a limit, it’s just how we roll. But we can say it’s definitely more than 5%. A lot more. It’s the easiest company policy we have as so many of the people who join us are already contributors. It’s not a requirement to join us, it happens naturally as the values and motivation of existing contributors align perfectly with our company culture.

It’s also been a wonderful way for us to get to know, and in some cases bring on board, some of the most wonderful, inspiring, and creative people we could ever hope to work with.

2016 looks likely to be a fantastic year for us – we’ve great projects and events on the horizon, and the open source projects we love have huge plans in store. We’re looking forward to meeting many of you at meetups, WordCamps, conferences and in the repos and Slack channels where we build awesome stuff. Come and join us – it’ll be amazing!