My name is Owain Cuvelier and a few weeks ago, on the 8th of May, I had a realisation which was so delightful I spared no moment in drafting this post. Before I let you in on that wee’ gem of a moment I’m sure you readers will identify with and are eager to hear about, let me tell you a little about who I am.

In the first week of January in 2012 I was offered a job I wasn’t expecting (even more pleasing was I didnt remember handing in an application). This job was to do an apprenticeship/internship at Human Made Limited, the exact title of my new position was unclear to me, so I dubbed myself a Padawan.

This life-changing offer came from little more than spending a few hours a week coming into the office where my friends work and investing a bit of my own time toying with some CSS and watching my background-color: go from blue, to red, to #92AB13.

Within this process of change code → see result I discovered small expanses of knowledge, it was a rush; which quickly resulted in my waking up earlier every day eager to get another fix, like a code-induced crack-pipe.

So, to what do I owe the pleasure of that feeling? Well before you look at the code, a brief disclaimer!

*This code is very basic, first step level, but read on, and you’ll find out why its significant*

So, I was struggling understanding how to access data in XML when playing with the last.fm API. Objects and Arrays, attributes with square brackets, all became quite a lot and I powered through more then one headache trying to understand.

Breaking down the data was key, switching between what I was printing was invaluable to my success.

It was when I wrote this little function that I had the delight, the biggest fix I’d ever had.
//
This might not seem like worlds most advanced code. But the significance of this function, was that it flowed from its form as a concept in my mind to fruition with no concious effort.
It flowed so swiftly and clearly that I saw it happen, I recognised I was learning.

I hope some of you know what this is like, as it has a profound effect on me. I went on to ace the API, as well as the Twitter API,
In the same week I utilised Twitter Bootstrap, and LESS.js.

It was a fine week indeed.

So that’s that. My best moment on the journey of becoming a Web Developer to date! 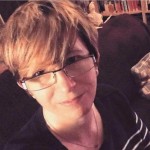 Kirsty is a WordPress Engineer, she lives in Shropshire in the UK with her partner, three cats and two rabbits (one of which is so fluffy he is becoming an instagram star!)